The Kathryn L. Venditti Mentoring Award is given annually to an academic librarian who has demonstrated excellence as a mentor to a librarian, library worker, or library science student. Through this award, ALAO strives to foster a culture of mentoring within the association. 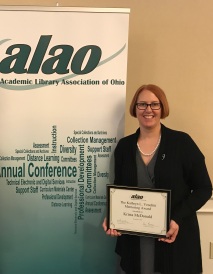 and mentor to many, Kathryn Venditti. Kathryn was an outstanding academic librarian at Ashland University from 1999-2015. She received the Jay Ladd Distinguished Service Award in 2014 and was an active leader in the field and a loyal colleague. In particular, Kathryn is remembered for her supportive mentorship to many emerging librarians. The ALAO Executive Board voted to establish this award in her name to honor her generous spirit, exhibited through her lifelong mentoring of both new and experienced librarians.

At this year’s conference, I was honored to present the 2018 Kathryn Venditti Mentoring Award to Krista McDonald, Director of Rentschler Library at Miami University-Hamilton. Elizabeth Woods, her mentee who works at the Ohio History Connection, enthusiastically nominated Krista. In her nomination, Elizabeth wrote,

“I first met her during a HUGE turning point in my life; I had recently moved into a management position for the first time. Luckily, I was paired with her through the 2017-2018 ALAO Mentoring Program. From day one, she immediately created space for comfort and growth. She is extremely personable and provided a favorable environment for my career development.”

“Agreeing to be someone’s mentor is only the first step. She worked hard to set up meetings for us to discuss issues I brought to the table. She provided in-person coaching, guidance via email, and advocated for my participation and engagement in leadership opportunities in library organizations.”

“What I appreciate most about her is her continued availability as a source of guidance. Our relationship did not end when we completed the ALAO Mentoring Program. She wants the best for you and for you to feel supported in the field of librarianship. Hopefully, others get the joy of becoming her mentee!”

Krista has been involved with ALAO committees and leadership positions since 2006. Most recently, she served as president in 2016 to 2017. I count myself as one of the lucky individuals who is mentored and guided by her. She gives so much to see people succeed.

Thank you to the 2018 awards committee that reviewed the nominations and selected our winners: ALAO President Eric Resnis, ALAO Vice President, President-Elect Katy Matheuws, Sue Polanka, 2017 Jay Ladd Award recipient and Jenny Donley, the 2017 Kathryn Venditti Award winner. Many thanks to Eric, Katy, Sue and Jenny for serving with me in order to recognize our colleagues and their important work.

This entry was posted in Vol. 37 no. 4 (Dec. 2018) and tagged Kathryn Venditti Mentoring Award. Bookmark the permalink.